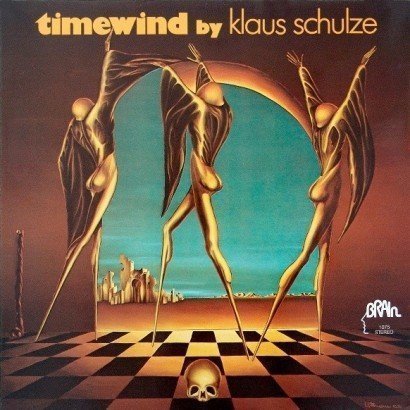 Well hurrah and hussar with brass knobs on! It was inevitable and unavoidable, now finally it’s here, the re-issue of a recording that is quintessentially Klaus Schulze through and through. I refer of course to the Timewind album from 1975. If it’s a Schulze album that genuinely has a bold statement to make, this is most probably the one I would choose from the last three and a half decades worth of recordings. Why Timewind? After all there’s nothing particularly groundbreaking about the recording, nothing startlingly hi-tech or advanced about it, some might even add that it lacks the dynamics of its predecessors. So why this album?

Timewind was the recording that announced to the world that Klaus Schulze had arrived with this his first international release, relative album chart success, plus a piece of musical kudos in the form of the ‘Grand Prix du Disque International’ award for the recording! Timewind marked a watershed moment, doing for electronica what Pink Floyd’s Dark Side of the Moon had done for progrock. It’s true, the harshest of his musical critics would have to observe that here, ‘something had happened’ to electronic music and there was no going back. It’s international success showing that for the mass populous Klaus had a message in his music – though what that message may or may not have been will always remain a mystery, (over to Klaus for an answer on that one. Though undoubtedly Klaus’ answer would be that it is for the listener to make their own interpretation of his music).

Through continuous development in a time where musical form and technology tentatively walked hand in hand, Timewind proved to be very much a melting pot of Schulze’s ideas from his previous works, crystallized and beaten out into a super smooth album where everything became completely focused in this, his electronic elegy to Wagner. For me it nicely brings to a close that chapter best described as Schulze’s formative years. A time that saw pure lo-fi experimentation giving way to more deliberate musical structures; a shift from electro acoustic treatments over to the wider use of synthesizers. It would seem that by the mid-seventies Klaus Schulze really had honed his interplanetary musical skills to an art form. Any lingering notions of psychedelia swept aside in favor of pure synthesis. Schulze may have only been on the fringe of the progressive musical scene back then, but this was the album that would set him apart not only from his contemporaries, but all else too! It was on this album Timewind that he would create a mood so complete he would struggle to better it for some years to come.

The sublimely grandiose Timewind originally comprised just two long playing tracks which pushed everything to the limit both in terms of vinyl playing time and in compositional approach. Unusual was the fact that the two extended pieces shared a similar A/B/A structure but appeared to have little else in common. Was Timewind a musical master stroke or merely a self-indulgent foray into the depths of what synthesizer technology afforded him? The reissue is presented in a gate folded card clip case featuring all the original artwork from the album together with a 20 page booklet containing a very down to earth write up from Klaus Schulze about his recollections of the time and the making of the recording together with more insights from Klaus Dieter Mueller on the last page. The re-issue package of Timewind now being a two disc affair – the original album making up the first disc, the second being made up of nearly an hours’ worth of bonus material!

The first disc of Timewind opens up with the glorious Bayreuth Return. A gale force electronic wind is blowing as small twittering synths drift around in an off world dimension. You know this is all just for effect as a uniform sequence surges forward propelling the piece onwards with an urgency and intensity that just takes over the entire track carrying the whole piece. At the six minute mark the sequencers seamlessly mutate into something completely different as Klaus pulls the rug from under our feet leaving just the high tempo, but the arpeggiations in freefall. The sonic panorama seemingly matching the cover art with its bleak desert like emptiness. This then constitutes the main body of the track with a sense of eerie calm as two echoed notes in the far distance come to us intermittently as more of a remote signal than any kind of theme. Switching register and key, Klaus fades the synths in and out of the mix. A steady blanket of organ string sounds fizz away sounding wonderfully thin and tinny, but acting as an excellent foil to the ongoing synth soloing and white noise effects that whistle through the mix. The last ten minutes sees the return of the thundering opening sequence, re-entering play like a freight train hammering down the track! This time around events don’t build to a climax as is so often the case on other album tracks of this nature; instead everything is given more pace by an increase in the frequency of sequencer pattern changes as he quickly retraces his steps back through the piece until a final and rather sudden metallic crash terminates everything.

Wahnfried 1883 fills the rest of disc 1 of this re-issue of Timewind. Like track 1, an ocean of white noise, twittering and gliding synth effects all serve to paint some kind of musical imagery which for the bulk of the piece shows no sign of any earthly connection. A broad sound bed of droning organ fills the stereo image as screaming synth solos fight to be heard above the tumultuous backdrop. This all culminating in a huge swathe of electronic instrument sound, (this synthesized wall of sound approach being revisited on the Mirage album two years later). The track drifts on towards the halfway mark where you will notice that the organ backdrop remains as intense as ever, but all else has switched to a more reflective mood. Something truly beautiful is being played out on the synths, but it is largely overshadowed by the depth of the organ work. High register synth effects return sighting some kind of closure for the piece. The sprawling wash of both synths and organ finally being brought to their knees by massive resonant synth sweeps which Klaus also edits in real-time bringing the original album to a most dramatic Wagnerian close, truly overpowering and absolutely brilliant!

Quickly onto disc 2; a complete bonus disc of material. Three tracks, two of them also from 1975 which were basically rehearsals for the recording of Bayreuth Return. Due to the rudimentary nature of Schulze’s recording gear back in the mid-seventies everything had to be done ‘on the fly’ in a single take, all synth tweaking and sequencer reprogramming was performed ‘live’, so rehearsal of what was about to take shape was pretty much an essential part of the whole recording routine. The sizeable Echoes of Time comes in at just under forty minutes! It has a completely different nine minute introduction to Bayreuth Return prior to the arrival of the familiar sounding sequences. For the rehearsal there are some slight differences in the mix and sounds used, but for me it lacks the real polish of the finished item. That said, do bear in mind that this is a massive slice of recorded rehearsal work, not originally meant for release at all, and yet it’s amazing, purely by way of the fact that Klaus again turns in a flawless performance.

The same can be said of Solar Wind. Again it’s a short rehearsal piece for Bayreuth Return (not that you would know that to listen to it), 50% of the track being made up of effects before moving onto some organ work which is totally detached from anything on the finished piece.

And what of track three, Windy Times? This little five minuter was a previously released piece from the ‘Essential Extracts’ promotional cd for the Contemporary Works Vol. 1 box set. Klaus Schulze regards the piece as a little homage to Timewind recorded in 2000 on modern equipment. Sequencers lead the way, but if l told you it sounded like anything other than Moonlake I would be lying. Does it sound like anything from Timewind? Not a bit of it! Excellent track though.

So there you have it, if you are looking for a musical experience that touches your sonic nirvana providing music that really does seem like it comes from another planet, Timewind is the answer. Timewind is a thirty-nine year old recording now that still doesn’t sound like it’s dated at all! Love it or loathe it, this album was unique in its days and maybe it still is. An album recorded ahead of its time and out of its time in that there really was nothing else like it. It’s for those reasons alone that you could say that here we have an album with the all-important ‘X-factor’. Timewind is an absolute classic! Did it really need an extra disc of bonus cuts? Well as always they are nice to have around, but it’s disc number one in the set where it’s all happening.

The borders of conceivable electronic music had just been extended into uncharted territory. Our perspective of what constituted electronic music was changed forever and the world had caught up with Klaus Schulze.

If you care to watch a complete and full-length time video of Timewind, just click the play button.