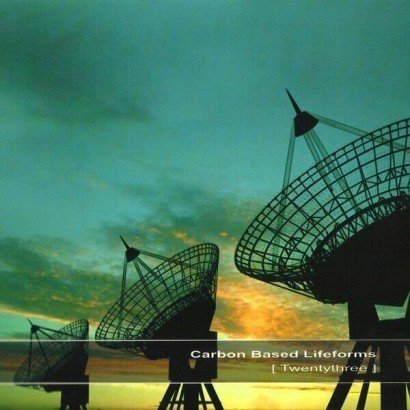 There are bands that change their style for better and there are bands that change their style for worse, on a certain album or just in general. Carbon Based Lifeforms is one of those groups that changed their style on this album and didn’t get worse, but also didn’t get any better. Their signature psychedelic ambient, “chill-out” and sometimes beat driven feeling from the epic trilogy comprised of Hydroponic Garden, World of Sleepers and Interloper was then over and ambient fans all around wondered what was to be expected of the Swedish duo? Abandoning the entire beat driven and “psychill” aspects from their music we were given Twentythree; an album that is entirely dedicated to sleep inducing multilayered harmonic ambient soundscapes.

On first listen, something will appear in one’s mind: there’s so much sound and space on Twentythree  that it’s difficult to take out anything negative from it; however, there are a few things that could leave a little to be desired. From the first track, Arecibo, it can be concurred that its vastness could be studied for years; not just quality wise, but visually. This track takes one soaring in the sky like an eagle with its deep brooding synths and layers upon layers of different notes and melodies. A low bassy synth takes the foundation and then multiple others pile on top to create a beautiful sunset dream-like utopia that continues for the little less than the 10 minutes it holds. Now here’s where Twentythree gets a bit underwhelming. The two tracks proceeding this, System and Somewhere in Russia, are a major letdown just because of the amount of power that the first song holds. They just sound weak and especially mediocre in comparison, not to mention they’re very boring. The synths are nowhere near as powerful and are just sort of there. Terpene takes some influence from the trilogy with a subtle arpeggiated synth and the song is fairly good for relaxation, but it would’ve been better if it had at least a neat beat to it instead of just pure ambient.

The best song on Twentythree giving a feeling of an extraordinary spaciousness is Inertia, which clocking in at 10 and a half minutes long, shows no sign of getting weak or redundant in the slightest, but further goes to prove that Carbon Based Lifeforms know how to make amazing space ambient just as well as psychill. This is where the album takes a bit of a turn showing that they can perform more expansive ambient genres with VLA, Kensington Gardens and the finale track Held Together By Gravity, which sounds like a mixture of reverberated field recordings and Steve Roach/Alio Die like textures as well. It delivers what’s expected of the genre and it does it well for the most part.

Quite a big problem that might arise for anyone who’s a huge fan of the “CBL Trilogy”, as I like to call it, is that these songs don’t transition into the next so that you’re left with a sense of abandonment after each track; as if the album is saying it’s time for a new “life”, get on with it. For those who loved the trilogy, they might find this a bit of a letdown, but after a good solid listen with an open mind, it might make your heart sink. On some listens it will and on some listens it could be dreadfully boring. All in all, though, Twentythree is definitely a solid venture into the more ambient realm of Carbon Based Lifeforms with some quality stand out tracks, and that’s all there is to it.