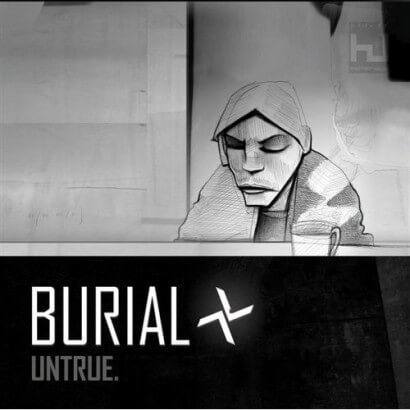 Untrue is one of the most evocative albums ever, as well as one of the most unique. How many albums sound like this? I really can’t think of any. It’s completely original, and every single time I listen to it it does something to me. I’ve listened to a lot of albums that deal with boredom, isolation, repetitiveness but this is a complete one off in the way it expresses those feelings. Burial manages to create an urban landscape and portray a sense of restlessness. The beats are fantastic, each sample is used exquisitely – especially the 90s R&B samples and it’s so ridiculously evocative.

It evokes the streets, both at night – where the streets are crowded with lots of people walking to get to wherever it is that they want to go while you’re just drifting along with them, feeling detached and disconnected. Then it evokes the streets really late at night, where the streets are completely empty and desolate – yet you’re still there, this time instead of feeling alone you are alone and somehow, it’s actually worse. Drinking alcohol at a house party full of people having a really good time, while you’re feeling completely removed. Or that same feeling, but this time inside of a club. It doesn’t really matter. Being in a fast food restaurant just before its closing, and seeing the employees dejection that mirrors your own and that’s the first time during the night that you were able to relate, empathise and connect to another human being. Being on a bus so late at night and only seeing your reflection. In fact, that isn’t quite right, it’s almost the only thing you can acknowledge but you also see distorted images of graffiti and a homeless man on the corner. It makes me think about the coldness and cruelty of a big city, as well as the inner existential emptiness you feel while you’re there.

Untrue has a feeling of claustrophobia about it, but at the same time a real sense of isolation and emptiness. Even though it’s a very urban album that makes you think about buses and the streets, it also has a reclusiveness and uncomfortable feel to it. You’re on the bus, but all you want is to just get home. It also has a weird sense of childlike innocence, more specifically the loss of it. A where did it all go wrong? Kind of feeling. The atmosphere Untrue manages to create really is a one of. The eerie synthesizers, the angular garage beats, the pulsating chord progressions, the haunting samples. Everything about it is perfectly crafted, produced and executed. Untrue is one of the most dark, brooding, unsettling albums I’ve ever seen. It’s the album that defines its genre, Untrue is a dubstep masterpiece.