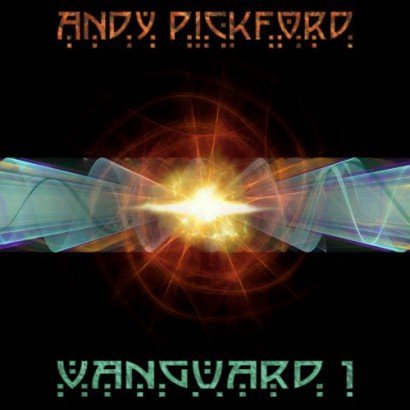 The main strength of Vanguard 1 is to hold constantly the listener on the alert with great rhythms torn between what makes the richness of the England School movement.

Andy Pickford is quite a personage who has had his hours of glory with the England fans of EM in the middle of the 90’s with a series of albums which favored an approach that several qualified as Electronic New Wave. This real precursor, we owe him the paternity of this envelope of Synth-Pop and Electronic New Wave which has invaded the market, and which still floods it, since Maelstrom in 1995, tried a wonderful adventure with Paul Nagle in 2002 for the Spank the Dark Monkey and the Binar projects, from where will be released wonderful albums of a more experimental and darker EM. An EM rocked and inspired of Tangerine Dream’s Rubycon years but with a splendid approach of techno for Zombies starving of sound effects. After this period, intensely productive I would say, he took a hiatus of 5 years and resurfaced in 2011 with a series of compilations entitled Remasters as well as a multitude of E.P. and remixes which were offered only on downloads platforms. “Vanguard 1” is a comeback for the artist on a major label and comprises original compositions as well as tracks which appeared on the Jera album released in 2012. Essentially, the music takes back the main lines from this artist at least enigmatic by offering a dynamic and energizing music where the Electronic New Wave style thrones at the top of a mosaic of rhythms which touches everything; from E-Rock to Electronica. The album offers 11 tracks, all linked to each other, for more than 70 minutes of pure happiness for the fans of Andy Pickford who does actually a strong comeback. And for the others, such as I, it’s an excellent opportunity to discover an artist who is very difficult to seize.

The introduction of “Phoenix” on this “Vanguard 1” is rather filmic with its wall of violins which floats like a thousand agonies of a soul to adrift. A melody delicately hammered by arpeggios, as much crystalline as those of a fragile xylophone, pierces this melodramatic veil, as well as a synth and its finely Arabian melodious approach. The arrangements are tied up well. A structure of sequenced rhythm is swarming in the background. The movement is nervous and entails the percussions and some oscillating loops into an energetic rhythmic pattern. And the universe all in sound of Pickford sinks into our ears. If the rhythm is keen, heavy and very lively, its subtleties accentuate its charms. Rattling percussions and others in tones of iridescent glass, feminine voices, lines of synth to the harmonies weavers of ear worm and strong arrangements flood our ears on a long minimalist route that Pickford doesn’t hesitate to water of superb synth solos with the dexterity of a guitarist in a rock band. We hang on to it, but our emotions become quick nuanced with the very the Chill and ambient Dub “Angel on the Water” where the voice, switched off in a kind of vocoder, of Pickford, although very melodious, as well as the numerous solos of electric guitar transport the listener to one thousand places of the England School territories. That reminds me of Massive Attack, here as the very beautiful but troubling “Opal” and its vampiric melody which is whistled on a beat jumping up in vapors of ether. But it’s very good. I liked that a lot and it gives a lot of depth to “Vanguard 1” whose first quality, except a music of an exceptional quality, is to hold constantly the listener on the alert. “Wish” is a very beautiful ballad with a synth which whistles harmonies which settle deeply in our ears. The game of percussions, some are wrapped with a poison of rattler, and the heavy line of bass give an almost erotic infusion to this piece of music to say the least lascivious. “Brightstar” is heavy and nervous, the line of bass cleans the eardrums with good arrangements, as filmic as Arabian.

The fifth track of “Vanguard 1”, “Quest” leads us in territories a little psybient. The music is heavy and ambient. Knotted in the intrigue and in ectoplasmic effects, it would be very good for movie scenes where the sweat has nothing to do with the heat. The electronic rock is especially very alive and very creative with a very appealing meshing of sequences, basses and percussions, as well as other effects of rhythms very attractive to the hearing, which support melodies as fascinating as spectral like in the solid “Gardenia”. “Rainwashed” is a somber and very elegiac ballad with a dark piano which cries its notes on a structure of down-tempo solidly anchored in an envelope which is similar to psybient, if would not be for the weeping violins. Very moving! You guess that my ears have munched to it at full. “Decay” is violent! The rhythm is dark and deafening with a heavy movement knotted in pulsating jerks. The cosmic effects and the numerous knockings of heavy percussions are going to wake Jean Michel Jarre’s souvenirs to some of you, whereas the film approach and its sinister voices can remind the universe of Mark Shreeve. It’s heavy and black as some of us will love it. My neighbors hated! Me? I adored and I selected it in order to be played on our radio show with “Phoenix”. In spite of the fact that it’s heavy and very black, the melody which nests on it gives constantly this desire to re-hear again. A trap of charms in “Vanguard 1”!

“Vapour” is not outdone. It’s another heavy and dark track which takes the shape of an odd military march. The atmospheres are intense, very intense may I add, with strong and nice synth layers perfumed of philharmonic moods. AP uses the full 9 minutes in order to give it a fascinating crescendo of atmospheres. An intense track which shows that Pickford feels at ease as much in music of ambiences as in Electronic New Wave style. And it’s quite a synth solo that he throws among the sumptuous and the dramatic arrangements which feed the stunning progression, both in the rhythm as in the atmospheres, of “Vapour”. “Clear Blue” extricates itself with difficulty from these heavy and dark atmospheres and ends “Vanguard 1” on a structure always so heavy and hopping with a nice melody where a synth, whistler of harmonies, does duel to another synth to the very creative solos. Bring on Vanguard 2!

You will find “Vanguard 1” in the AD Music web shop here.