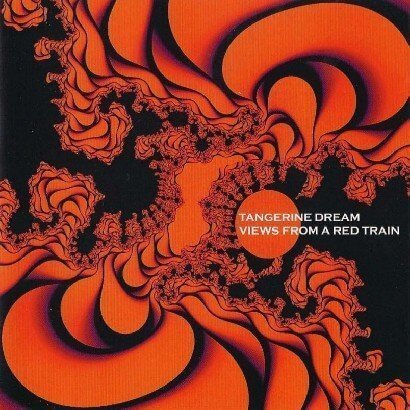 Views From A Red Train (Eastgate 027)

Views From A Red Train is a 2009 studio album from the German Electronic pioneers. Three tracks from the album have already made their first public appearance during the Frankfurt gig (at Alte Oper One Night In Space Concert) last year. The album contains very pulsating and energy driven material and could be the most Rock-oriented release in their long and respected career.

Carmel Calif: An all-round funky little number, most familiar to everyone who saw the group play it in Frankfurt, but this time shorn of Linda’s sax, but panic not, Bernard’s trade-mark fluid lead-guitar is still in evidence picking its way through Edgar’s catchy plucked melody. The track ends with `ooh-ahh’ choral sweeps whilst guitar notes fade in and out. Camel Calif only made the CD at the 11th hour but it’s a great opener. (8)

Passing All Signs: A slow `rhythmless’ string synth slips across the sound stage, followed by a few bubbling synth notes and virtual voices. They glide about slowly and classically. It’s Edgar’s skill as a composer (the combination of chords and bass notes) that keeps your interest here, it could fall into a syrupy new-agey mess, but he walks the line nicely, drawing the emotion out of unexpected places (7)

Leviathan: Inspired by Speed-heads on Lake Mirage (a salt lake 100 miles north of LA). The track starts with a rippling `Reich-lite’ sequencer, over a 8th note bass pulse, louder and louder, and then a pounding 4 on the floor beat, static for 4 bars and then it’s followed by a squelchy bass riff as sequences ripple and roll, a guitar riff kicks in, step forward Bernhard. He goes through every trick in the book, a little power here, a melodic riff there, on and off the beat, he once again shows exactly why Edgar uses him. The track cycles around and around, mesmeric, with a thumping rhythm from Thorsten, it’s as solid as an elephant in concrete trainers. Around the 6 minute mark the piece slowly fades out. (10)

Hunter Shot By A Yellow Rabbit: `Hey yeah!, yeah!, yeah, yeah’… No not my OTT reaction to it, it’s just the vocal opening to this track, whether it’s real, sampled or virtual it doesn’t really matter as it’s soon added to by plodding funereal-like bass drum, (here we’re mourning the rabbits, armed to the teeth or otherwise) whilst a tiny mono-synth plays a plaintive melody, sequencers kick in, Iris adds some electro-rhythms as the energy builds and Edgar rips in with some guitar (not a million away from his playing on Blue Dawn) twisting and turning…a brief pause and then the `axe-man’ Edgar is back. His craft is here by the bucket-load, not a pop melody in sight, but if sonic character was fish, he’d have his own chain of sushi bars. A nice and unusual track! (8)

Nutshell Awakening: Far better than the version they played at the Alter Oper, there it was interesting without being outstanding. The album version comes replete with lilting guitar from Bernhard and skittering beats from Iris. Apparently Edgar composed it on a flight between LA and Osaka, now that’s in-flight entertainment (7)

One Night In Space: A new mix of this already familiar track, but this time it comes with Bernhard’s guitar, perhaps lifted/ copied from what he played in Frankfurt last year, and damned excellent it is to. Rather dry but right up in the mix, as the sequences roll around him, he jumps from power chords to rhythmic riffs, until he becomes a human sequencer (checkout his fingers on the Frankfurt DVD… It’s like 10 eels head-banging on the fret board…amazing stuff…tasty fish!). (9)

Serpent Magique: Rumbling and rolling, the track hints at Madcap’s Flaming duty and Summer in Nagasaki, with it’s fizzing synths, and pulsing sequences, without being either, it slowly unveils a main rhythm, complete with programmed snare rolls and guitar from Edgar, foot stomping stuff with lots going on in the mix, but without anything really taking centre-stage, it eminded me of Dalinetopia in places, you’d never guess that Edgar’s Laptop crashed in the Austrian snow (I’m sure the manual doesn’t recommend this Edgar!) (7)

Lord Of The Ants: How the heck do you review a track like this? Fast tempo, with foot tapping rhythms, cycling synth-sequences, Edgar wailing away on his guitar, nothing outstanding until the last seconds and then there’s a few notes of beautiful synths to tease you and then it’s over (7)

Fire On The Mountain: Right out of Pete Namlook’s rhythm draw comes a percussion loop jumps into the mix `hand-in-hand’ with a few hints of Summer in Nagasaki. A rather cheesy sequence is added, but fear not it comes accompanied with a bouncy companion, does Andy Pickford have any German relatives?.. no hang on here’s Edgar’s guitar. Overall a nice solid track (8)

Sound Of A Shell: My initial reaction to the start of this track was `Eh, have I got the right CD here?’ It sounds like it should be the beginning of a Bjork song. With it’s playful almost `innocent’, echoing synth sequence. Don’t worry though as it’s soon added to by a warm wonderfully rounded bass pulse. Soft choir chord changes slip in almost un-noticed complete with soft `hey yeah’ female vocals and percussion `crunches’ to remind you a rhythm might be coming (like a Berlin train it’s bang on time). A double-tempo sequence is added, and the track builds with subtle changes to the sequence as it chugs on and on and its here that Edgar and Bernhard play their trump cards (well it’s acoustic guitar really) and they quietly pick out a few notes each. The lightness of touch floored me on this track; it’s a perfect way to end the album. An emotional kick to leave you moist eyed and fumbling for the repeat button, 6 minutes and 41 seconds of shear musical perfection. If I could I’d be giving a big fat 11 out of 10… So there! Catch you later I’m off to buy some shells (10)