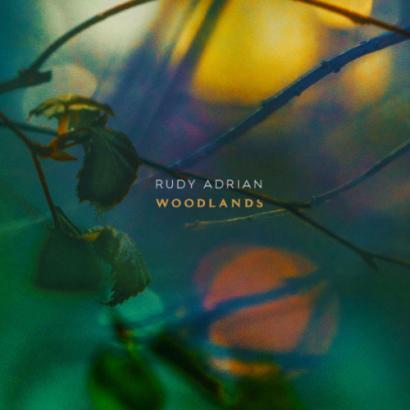 The sounds on the album Woodlands are pure atmosphere, the listener is drifting in space. He is imagining the sensations of walking along a wooded path and experiencing the bliss of deep listening. All of this in a contemplative forest of mystical moods, expressed using textural electronics. Your visit to the timeless spirit of the woodlands will bring you back again and again to an electronic dream of future and ancient arboreal beauty.

Woodlands is an electronic slow homage to nature, the feeling of meditating while walking through the forest. Rudy Adrian is a musician with a history in the study of botany and forestry who lives in Dunedin, New Zealand. His magic blends the universe of his Yamaha SY77 synthesiser and Kurzweil K2000R sampler, with wee bits of natural sounds occasionally seasoning the musical mixture. You will hear synthesizers with some field recordings of birds, trickling water, and a little bit of thunder peeking out of the electronics, and some sustained ethereal vocal intonations, also a bit of Baroque flute.

I had the opportunity to ask Rudy to share some details about his work. “The Yamaha SY77 is integral in how I make music. The SY77 came out in 1990, so my one is nearly thirty years old and going strong! It does FM synthesis, good for creating bells and soft, thin drones that don’t take over the whole sound spectrum, and it plays samples. The beautiful thing is that these sounds can then be filtered to make sounds that slowly get brighter or duller.”

He continues, “I think most people creating things like some limitations – for instance doing illustrations just with pencil. A major restriction I like to impose on myself is using a very old MIDI sequencer. This can record the notes as I play them on the keyboard and then I can overdub and manipulate the data (eg: transpose, change velocity, alter timbre) as I like. Once I’ve built up a nicely layered piece (the SY77 can play 16 different types of sounds at once) I can then record the final result. The software only works on an Apple MacIntosh Plus – so that’s from 1988, with one megabyte of RAM, using 800k floppy discs.”

2. The tracks of Woodlands

The album begins with…

…”Postcard from Karnak” (3:58), featuring the magical glowing synthesizer sounds, spiced with rattles and ethereal vocals. The Karnak Temple Complex is located near Luxor, Egypt and comprises a mixture of decayed temples, chapels, pylons in the precinct of Amun-Ra. What remains in the desert are piles of stones around a foundation with a few gigantic pillars standing upright in the ancient sun. When I asked Rudy about the track title, here is what he had to say. “The reference to Karnak is partially a reference to an earlier track called “The Legacy of Luxor.” I am vaguely curious about Egyptology, but the major inspiration for the title came while pondering a suitable title, seeing displayed on a colleague’s desk a postcard from Karnak.” Sometimes the real explanation is much simpler than my fabled speculation.

Following along the wooded path you will soon be enraptured by the second track, “Deep Within Forbidden Mountains” (4:52), and listening to the sounds of water hidden in a synthesizer glow, with distant wind expressed by flute, and thrilled by a hint of natural thunder.

I asked Rudy about the flute heard on this track. “I’ve known flute and woodwind player Nick Prosser for many years. He kindly played flute on a number of tracks since the release of the album Twilight in 1999. Also, we also did a live concert together, released as the first half of Concerts in New Zealand. He can create a tone on his Baroque flute which sounds somewhat like a Japanese Shakuhachui, which is intriguing, because the Shakuhachi is an end-blown bamboo flute, while a Baroque flute is quite different, being a transverse-blown wooden flute. It’s great to have his unusual technique on the baroque flute adding a significant amount of magic to the albums.”

After a time in a hidden opening…

…you will come to the “Fields in Evening Light” (5:47) which are decorated with the sounds of birds and a burbling brook, emerging from a slow synthesizer melody, ethereal vocals, and what sounds to me like a throat singing tone. Next, turn your attention upwards to the “Treetops” (5:13) with what sounds to me like some synthesized insect noises, and tones of a wind slow and sweet.

The title song “Woodlands” (4:55) features what sounds to me like synthesizers hidden in the breeze. The woodlands in nature are a magical place, they once covered huge portions of the earth. According to the almost forgotten old legends, there once were no walls, pavement, or plowed zones. There is just a continuous flowing region of arboreal splendor.

Persisting on the path, behold the “Moonrise” (4:02) celebrated with gentle gongs and chimes, perhaps the slow call of an owl or some nocturnal creature and an ethereal vocal suspended nearby with bending notes slowly twisting in the darkness.

The next track is “Autumn in a Forest Glade” (6:04) with shimmering chimes, mallets on wood, synthesizers and possibly an ethereal voice just below the surface. The pace is very slow, like huge clouds high above the treetops, taking forms, constantly in motion. The colors are leisurely modulating at a great altitude that slowly glides to a conclusion.

…the slow motion, with melodic reverberation and echoes, decorated with a melodic shiver, a sound almost like a xylophone. “Under a Sheltering Tree” (7:20) emerges with layers of textures, dry rattling chimes submerged below a glowing sustained synthesizer, with hints of chimes and some more shadows that continue the theme of sounding like xylophones, with bending arcs of light reaching high above us. Midway through the track there is a subtle sensation of being deeply submerged under water as the arcs continue to bend and sound like slow motion gigantic whales are somewhere way up there.

Later, back in the forest, the hike continues and we come to the “Hidden Pond” (4:11) where tinkling metalic chimes mingle with what sounds to me like a hidden flute in the distance. The evening darkness slowly overtakes our journey, we proceed with the “Lantern Walk” (3:39) in the twilight and growing nightfall. I hear the night insects and feel some distant glowing textures. The vista is spectacular deep in the forest, now it is completely dark. The sky is littered with endless jewels, we sit quietly and watch the “Stars Between Boughs” (9:09) while listening to the slowly drifting sonic air.

The closing track is titled “Three Views of a Japanese Garden, Part 1” (5:24) which opens with the sound of trickling water, decorated with chimes and ethereal vocals forming syllables, never words, perhaps this is the language of the tree spirits.

3. Where to buy Woodlands?