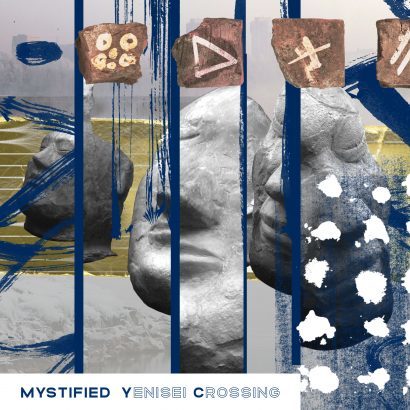 Subtle music using the generative-iterative method, created for those with a taste for the dark and minimal. It has also been said that the tracks have an inner consistency, that these tracks make a good set, that they work well together and with one another. They are also a bit dark and edgy– they push the boundaries of ambient. With this new release, we must admit, there is a chance, a possibility, that it will be summarily rejected, and that excites me.

Taking chances is something we constantly learn to perfect, in order to build upon, or to plunder our own new treasures from, all in order to find an unexpected new way into our futures. We, the listeners, are at the center of things, sound identities can often be intentionally obscured or appear unconnected to their source, in order to unlock our own completely new possibilities for organizing the music of our future “Great River.”

1. About the album Yenisei Crossing

…extra-musical acousmatic and experiential mixed organic ambient spaces. The sound is largely consisting of repeated short segments which sometimes sound something like tape loops, perhaps to be listened to while working, sleeping or doing other things. There is no conventional sense of melody, the tempo and rhythm are not restricted and are not based on heartbeats or traditional dance metrics, so it sounds strange and unusual, which is why it is so highly prized. This sound is definitely rare in any music store, unless you already have considered the growing history of Musique Concréte and experimental composition by the likes of Rapoon or Zoviet France .

My experiences with audio loops were always with a reel to reel tape recorder, a razor blade, and some sticky tape to hold the circles of magnetic recording tape together. It creates an endlessly repeating sound that can be amusing to experiment with. I had the opportunity to ask Thomas Park aka Mystified about his current work, and this is one of the things he revealed.

“It has been said that all music is rhythm, or percussion. If this is true, then I hope to help musicians and listeners alike realize that they can be free of militant or precise rhythms, as I feel that the West has a sort of craze with rhythmic precision that is far from ideal.”

That leaves the door open to quite a lot of…

…otherwise unexplored territory. Next, I asked him what the album’s title means. When I searched for the word “Yenisei” I learned that the Yenisei River flows through Siberia and into the Arctic Ocean, it is the fifth-longest river system in the world. The maximum depth of the Yenisei is about 80 ft, the average depth is about 45 ft. Starting in Mungaragiyn-Gol (Mongolia), it flows north to the Yenisei Gulf in the Kara Sea. To the west is the often-frozen Western Siberian Plain, to the east is the chilly Central Siberian Plateau. The Yenisei River basin includes the deepest lake in the world, Lake Baikal. The Yenisei River flows through a large part of central Siberia.

This is what I learned from the composer about his album title’s relationship to the Siberian river. “The river “Yenisei” is part of “Yenisei Crossing”, which alludes to a crossing of that river. Why a remote part of Russia? I have had a series of dreams of varying clarity in which I live in primitive Siberia, eking out a living on the chilly plains.”

I asked him specifically about the story of the…

“At the time, a lot was going on with me creatively. I had been working on a series of Python applications that enabled my processor to, mainly, choose a body of samples, treat them in any of certain ways, and then map them out on a live looping console. I could get some unexpected and really interesting loop-based compositions this way.”

“The first immediate advantage was that I did not have to spend hours preparing loops for mixing. The Python code took that task out of my hands. Nor did I have to rely on my own rather specific and perhaps predictable choices. The random functions available to me put sounds together in ways I would not have predicted. Sometimes the result was unlistenable, but more often than not it was intriguing, to say the least. Pursuing coded music has become a sort of dream-escape for me, or pastime. Like my nocturnal visions of Siberia, they took me places I never thought I would experience.”

The Yenisei River valley is habitat for numerous flora and fauna, with Siberian pine, Siberian larch, and Scots pine, or Pinus sylvestris, which was abundant in the Yenisei River valley before 6000 BC. Some of the earliest known evidence of human enigma can be found at the confluence of the headstreams of the Yenisei Valley, where stelae , or stone monoliths and memorial tablets which date from between the 7th and 9th centuries AD, are still waiting.

…random string generation. The composer suggests that you might think of them as remnants of some forgotten language, or, perhaps, transmissions from space of someone we have yet to encounter.

Track by track, I have created sort of an impressionistic libretto of the invisible force of the sounds. The sound is unusual, so my descriptive approach attempts to meet the challenge presented by the new art forms. I know of no other way to describe what I am hearing.


What does the work say?

Did we unravel the mystery? Is it music? Where does it take us? This strange so-called music has thrilled and alarmed researchers forever, long into the future. Laymen often find it unintelligible, a monstrous reunification of music, with dissonance, chaotic melodies, disturbing symphonies of noise. What does Mystified intend? When a situation leaves you baffled or puzzled, you are mystified. I am mystified. There is wonderment. The verb mystify is at the root of the adjective mystified, from the French word mystifier, perhaps from either mystique, “a mystic,” or mystère, “a mystery.”

3. Where to buy Yenisei Crossing?

You can buy the album Yenisei Crossing at the store of Spotted Peccary Music and Bandcamp.