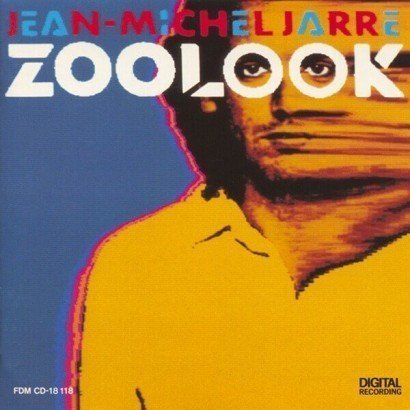 With “Zoolook”, Jean Michel Jarre transcended the wonderful world of EM in order to show that its exponential potential was always in the foetal state. More than avant-gardist, the use of vocal samplings has exceeded all what was ever done and has surprised the whole music industry in 1984. And if I recall well, even his father, the famous film music writer, was quite impressed by JMJ’s new musical direction. So to make his experimental sonic fresco, Jarre multiplied the samplings of various human voices recorded during his numerous journeys in the four of the planet. And to humanize this music Jarre surrounds himself with a real band and breaks his shell of solitude to bring to the foreground a new musical madness that will entail him to give gigantic outdoors concerts where millions of eyes and ears will be marked for ever by this weird Frenchman.

The first synth lines of “Ethnicolor”, which sound so much like an elephant trumpet, bring me to heaven. Sounds of mammoth are roaring among the deformed voices of a synthetic dialect where the wonderful voice of Laurie Anderson calms the worry of this ambient vocalized sonic tempest. Floating and waving, the first movement sneaks among these voice effects and some scattered dramatic percussions which shape an uncertain rhythmic pattern. Percussions which bursts here and there among sinuous synth waves which cut out the ambiences by multicolored sound streaks. The bass snores. It spits its musical venom which increases a pace beneath the hiccupping voices. Was it the first steps of hip-hop? Anyway! The abstracted beat goes up and down among some threatening synth breezes and buzzing effects. The drum of Yogi Horton is vicious and each knock breaks the pace with strength on a jerky and a nervous organic tempo fed by a vile bass. Taken in a whirlwind, these sound elements are sucked up and spat out with a passionate rhythm with unmistakably delirious sound and voice effects that an immense shroud of synth pads and lines transports with harmony. These are 12 minutes of pure magic and a masterpiece which worth the buying of “Zoolook” and which worth in fact the entire discography of Jarre. I read somewhere that “Diva”, like “Blah Blah Café” by the way, was pulled out of the Music from Supermarket sessions. It starts with a rather ambient mood where the vocal effects, mixed to the childish exclamations of Laurie Anderson, are of an intriguing charm. A light tempo, slightly beaten up by the bumps of Marcus Miller’s bass, settles down. It’s a kind of simple-minded beat which is livened up by a play of voice and by percussions which maintain an increasing interest. This is music piece made for an avant-gardism Diva. And this suits very well to Laurie Anderson.

The title-track is wild! I don’t know anybody who dislikes the vicious beat of it. It’s a boiling track which breathes life and trance music. In fact, it will be remixed worldly so much it’s catchy. The rhythm section is hallucinating. It turns violently with this DJ sound technic of shack-shack-shack… Kraftwerk on dope! And it will rip the paint out of your walls. “Zoolookologie” is the same vein. It’s the commercial hit of “Zoolook” and the play of the bass and percussions is simply catchy. You will love this. So will you with “Blah-Blah Café” which is another lively track with a fat bass line and it juicy chords which hop in the lines of a good-humored synth and of its saxophone scents. The arrangements and the samplings are brilliant, so much that we don’t even know if it’s not a synth which does the talking. “Wooloomooloo” and “Ethnicolor II” are two other short tracks where the ambiences are crossing electronic moods variegated by voices effects and insane samplings.

“Zoolook” is a masterpiece of boldness. After 3 albums where he reinvented cosmic EM by making it more melodious and livelier, Jean Michel Jarre feels the urge to do things differently and he does. And this move is significant because it has opened the doors to a new kind of EM where the techno and the space music blend perfectly. It’s the birth of a more intelligent and a more progressive techno that will hatch some years later. Obviously, fans of the first era were disappointed. Myself I freaked out of surprise when I heard the dance rhythms of “Diva”, the second half, the wild “Zoolook”, “Zoolookologie” and “Blah Blah Café”. But Jarre was brilliant. The sound effects are so crying of ingenuity and so performing on a good hi-fi system that a listening was an obligation. And the dependence followed. A brilliant stroke of genius. Period!