The story of Robin James

Robin James (also known as Robin B. James) is the author of many high quality in-depth album reviews on this website, Electronic Music of Brainvoyager. But who is Robin James? Let’s find out. 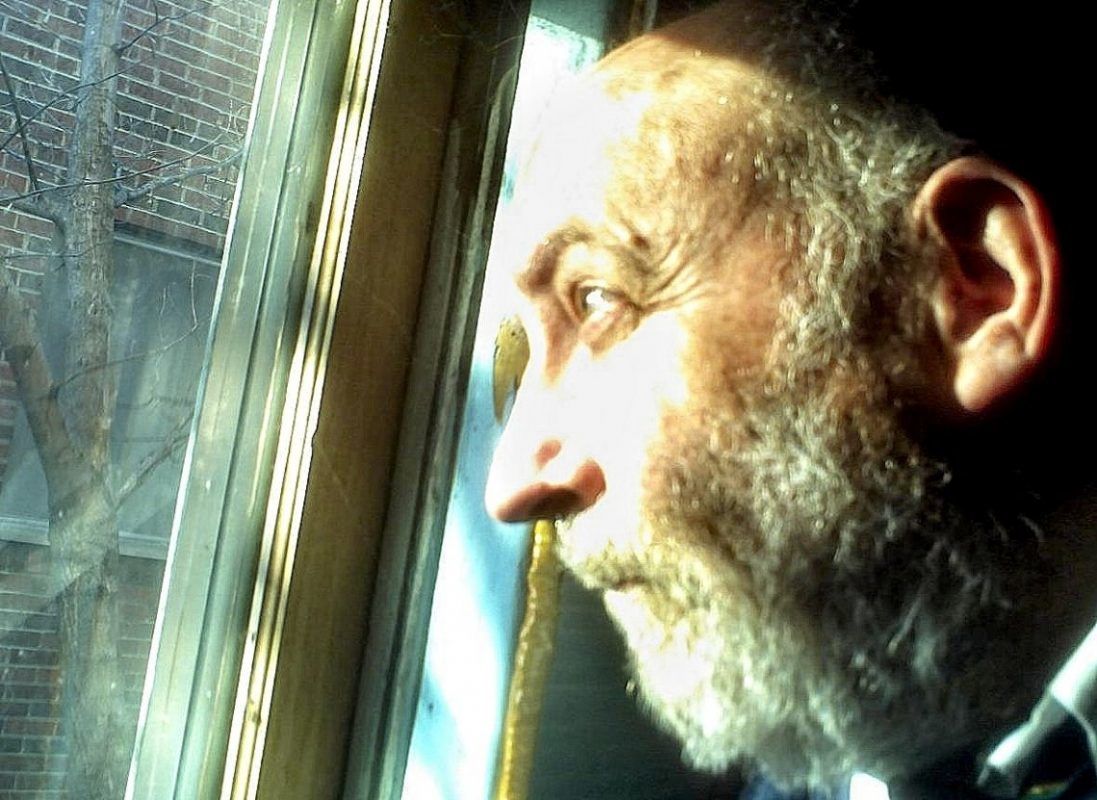 …the land of Michigan is gripped by an early blizzard. Far up in the sky Sputnik circles the globe, the first artificial satellite, which begins a new epoch in evolution. The space age has begun. On radios a new voice is heard, drawing in the youngest listeners and repelling their horrified parents, further establishing a new cultural tradition which will become known as Rock and Roll. The era of Elvis has begun.

Robin James, also known as Robin B. James, was born to parents who were survivors of the Great Depression of the 1930s, followed by the global Double War against the Nazis based in Berlin and against Imperial Japan based in Tokyo. He arrived late; Robin James was the accidental last baby born into a family of Baby Boomers. They had banned Elvis from the home listening universe. Later, Robin welcomed the music of Jimi Hendrix, as his parents were too tired to do any more banning.

The house was old and haunted, there were eldritch spirits lurking in the whispering darkness. Robin dreamed of surgically grafting the wings of bats onto snakes and living under the water in oil drums. The neighborhood was quiet and remote, tucked away from the busy downtown but within easy walking distance. All this was next to a damaged river, damaged by the dominant industrial culture that ignored the natural world and dumped chemical wastes with no regard for any consequences.

All this changed during his early life. He graduated…

…from High School the year that an American President resigned from office in disgrace, setting the stage for chaos and new experiments in social order and the arts. At the same time the economy changed, and the nearby downtown was forevermore no longer so busy. Such is the way of our modern culture.

Graduating from undergraduate studies in 1979, his first attempt to make sense of his place in the economic web before him was to establish a performance art enterprise. It was The Theatre of Transformations, a small collaborative adventure exploring tales of death, rebirth, new life and mystical improvisational performance art. All this influenced by Rimbaud, Artaud, and the puppetry style known as Bunraku. His partner in this was Lorraine Tong, whom he met at The Evergreen State College when he was studying Motion Picture Production. Lorraine Tong is the sister of the legendary Winston Tong, who had a taste of global success with the San Francisco based band Tuxedo Moon. Both Tong siblings went on to establish solo careers in contemporary performance arts. 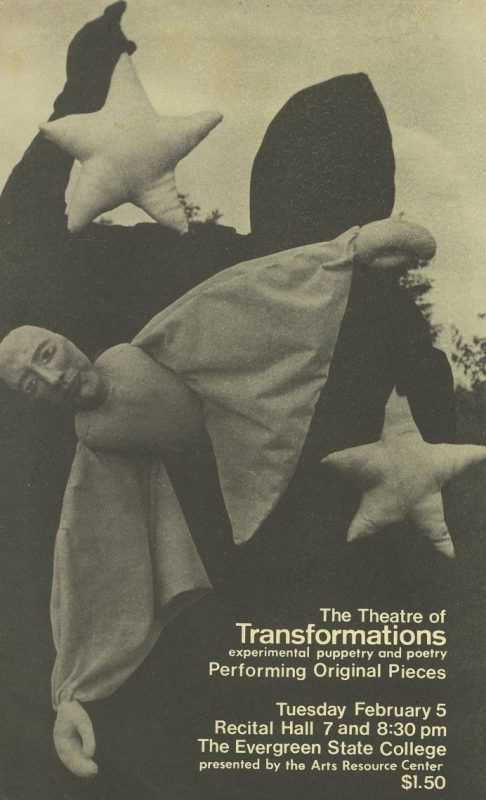 Olympia Washington proved to be the most spiritually nourishing environment Robin had ever experienced, so he abandoned his native land by the river in Michigan for the foggy shores of Puget Sound, where everyone was in at least two or three bands and the arts were celebrated openly. Poverty still is normal for artists there.

A turning point for Robin James was…

…volunteering at the local community radio station with the provocative call letters of KAOS-FM. Timing is everything, he arrived in the late spring as the student body was preparing for summer travels, so there were lots of openings and he went from naive volunteer to Operations Manager in an astonishingly short period of time. This radio station was pioneering the concept of aggressively promoting small labels and independent arts over the gigantic bloated corporate ogres of mainstream music industry capitalism.

One of the fruits of this independent music movement was a magazine known as OP, published by the Lost Music Network right there in Olympia. People usually explained the name by saying “Lost Music Network, LMN… OP! Get it?” The point is the music, specifically the music made by small brave creative entities with a need to express themselves and that overcame the tradition of seeking to become rich and famous decadent “stars.”

Among these brave souls were the seeds that went on to become the next level, Sound Choice Magazine, Option Magazine, the fanzine Dresch, and the labels K, Subterranean Pop, and Kill Rock Stars. Later came the revolutionary bands Bikini Kill and Sleater-Kinney.

You may recognize Subterranean Pop as the progenitor of the infamous label Sub Pop which continuously went out of business for decades but is still in existence today. Also surviving is K records, which was founded by the visionary Calvin Johnson. Everything else came and went. Such is the way of our modern culture.

In 1985, after the calculated demise of…

…OP magazine, Robin James was coaxed into starting something new. Something new based on the collection of independently produced audio cassette contacts he had gathered during the time he wrote for the column “Castanets”. Graham Ingels established this column at OP.

The story of Castanets is important. Every issue of OP magazine contained hundreds of reviews of new releases, mostly on vinyl in the form of singles, EPs and LP discs. 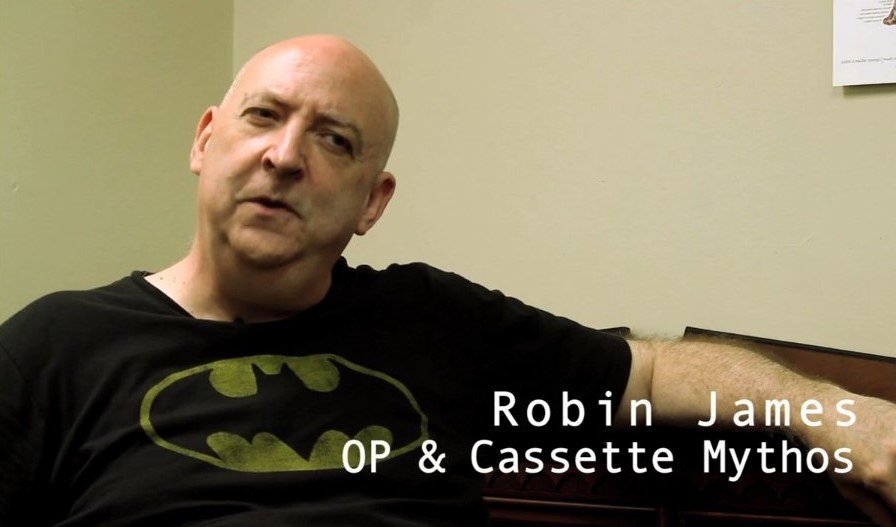 This is all well before the advent of the compact disk. At the bottom of the box was a growing collection of left-over unclaimed debris, little plastic freaks, the dreaded audio cassettes, at the time the joke of the music industry. Anyone can make a cassette; real music was on vinyl. All that changed, such is the way of our modern culture.

Thus, the formation of Cassette Mythos saw the light. Cassette Mythos was a concept in search of a destiny. At first it was just a collection of reviews, might as well try a newsletter to connect this community of cassette culturalists. How to generate content for the newsletter? And how about interviews. How to manage the interview process? And how about sending around ten (or so) questions to everyone on the list of active enthusiasts. All cassette enthusiasts collect tapes, most of them create tapes and many demands to have their tapes heard by any means necessary. So, the chaotic process began.

The intention was to gather the responses to… 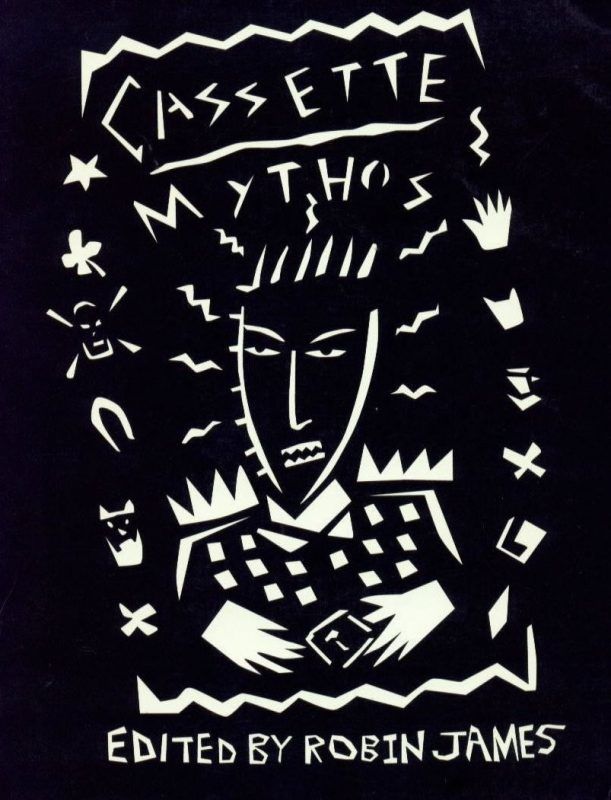 …the ten questions and share them out on paper in the form of the newsletter. Then came an unforeseen but logical development. Some of the responses came back on cassettes. Spoken word with samples of music, thus the printed newsletter gave way to the Audio Alchemy Digest, a cassette magazine. This was not exactly a new concept at the time, but the notion was ripe for plunder, which is how art advances.

This led to a radio station in Berlin and one in Tokyo to actually broadcast the words and strange sounds of these pioneers of audio arts, followed by an ever growing global network of radio stations, generating new waves of new inventions and new audio art forms. See how that somehow ties in with the beginning of Robin James’ story? Global revolution is part of the modern arts.

Next came the video bicycle trip: a list of willing hosts was established and a blank video cassette was sent out, three of them eventually, each host agreed to add on a few minutes of their work, and then send the tape along to the next host. Of the three tapes that bravely set out, one actually returned!

Basically, what this means is that the…

…artists would send Robin James their carefully produced work and he would jack up the sound and send this ruined version into that worldwide showcase.

The most actually successful aspect of Cassette Mythos (so far) was in the printed form. The project began with a collection of cassette reviews, what to do with them? How about dress them up with the interview text! Maybe try to get some of the most enthusiastic participants to contribute longer essays. What next? How about a search for a real publisher so that huge amounts of money could be made and further adventures into the arts could be funded, as well as furnish each of us with a lavish or at least comfortable lifestyle and escape poverty forever! So, he began a search for a publisher, at the time the way that worked was to find a literary agent who would champion the project to the big boys where the money lives.

The first and only agent who took the project seriously suggested that a number of established stars be included in the mix. How about Frank Zappa, Bruce Springsteen and Tina Turner? So, it was up to Robin to contact these superstars and get them into the project, to join the team. None of them responded, and the agent quickly lost interest.

The book came about when Sue Ann Harkey, one of the most enthusiastic participants in the greater universe of cassette culture, took the project to one of her employers, Semiotext(e) Magazine, which is a twin of Autonomedia, publisher of actual books.

Thus was born the black book with the…

…cover art by the graphic artist known at the time as Suz Dycus, now herself transformed from the graphic and audio designer of arts to residing on the Southern border of the United States, dedicating her life to new things. Thus, is the way of our modern culture.

None of the cassette reviews are included in the book “Cassette Mythos” (ISBN 978-0936756691), the spirit of connecting the creative entities was complicated by the nomadic nature of young artists, so there was no point in providing the mailing addresses as everyone had moved multiple times, plus they often used only their band names and not their real names, so to make the book they decided to keep the spirit and loose the physical body.

With the success of the book, Robin James found himself again in poverty with the added burden of a huge backlog of correspondence. Compensation for the book was in the form of a box of books, which he quickly gave away to his friends. In ten years of successfully publishing reviews in multiple magazines, he had earned a total of just under $200 and now had well over a thousand eager correspondents. The task of dealing with the monster he created drove him to give it all up (not all, just the hopeless aspects) and return to higher education and a real “career” in library science. Thus, began his dark years of wandering.

His greatest lesson during this time came…

…from the homeless man with no legs who was living in his car by a river in Michigan. Things can always get worse.

In Columbus Ohio during the year 2017, Robin James lost his last job as a librarian and found refuge with his old friends back in Olympia, a return to the nurturing world where everyone is an artist. An identity crisis was resolved when he was offered the opportunity to review jazz recordings for his friend Rotcod Zzaj. New opportunities emerged and a return to survival level poverty which is so common in the creative culture artists live in.

This is his era of triumph, joining spiritually in the glory of Brainvoyager! On to new dimensions of sound and wonderment!