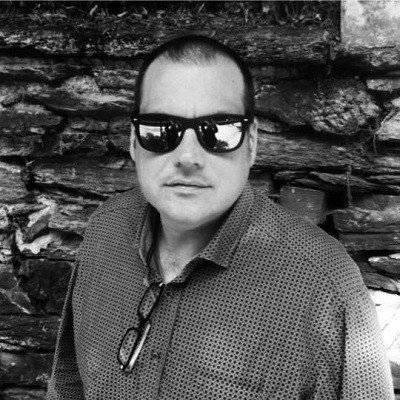 From the album “Taxon”:

Serge Devadder (Brussels, 1966) maintains a rather intuitive approach to creating his electronic soundscapes. He started experimenting with analog and digital synthesizers, sequencers and electric guitar in the mid-80’s. He developed his personal blend of ambient textures, dense loops and polyrhythmic patterns.

His first official release was the collaborative CD “The Shape Of Solitude” in 1999 on the Swedish Multimood label. It was a release together with the Belgian leading experimental multi-instrumentalist Dirk Serries. Dirk Serries is better known as Vidna Obmana / Fear Falls Burning.

In 2000 he designed the soundscape for the Fragmind computer game. Over the next years, Serge Devadder regularly released isolated tracks on various samplers in the USA, Europe and Asia. During the release of his work, Serge further developed his musical style and technique.

In 2014 he self-released his first solo album “Cambrian” which contained a selection of pieces recorded between 1992 and 2014. This retrospective album prominently featured electric guitar-loops and a deep aquatic ambience. The next album “Ganda” was released on the famous Dutch Groove Unlimited label. This album contains the entire live performance at the 2016 Cosmic Nights Festival in Ghent.

Serge Devadder’s third album “Taxon”, released in 2018, was his second album on Groove Unlimited. Oscillating between immersing ambient atmospheres and complex sequencer-driven patterns, it offers a deep dive into mysterious textures and moods. “Taxon” is inspired by the darker aspects of evolutionary biology as well as the abstract paintings of Devadder’s wife Birgit Schweimler.

All links to Serge Devadder´s media