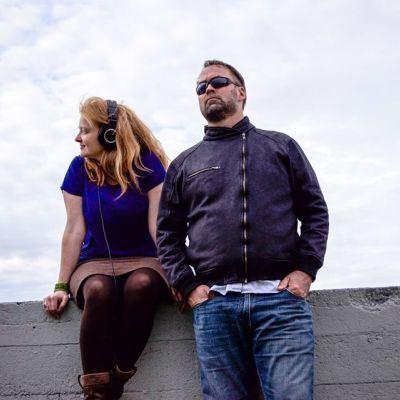 From the albums “Tides” and “Life & Love In The Hologram”:

If you like electronica, synth pop, future pop or indie electronica, then please check out Eric Smith & Shannon Alexander a.k.a. “Static Shore”. This synth duet comes from Seattle, Washington, USA and they have 2 ep’s under their belt with “Life & Love In The Hologram”, released in 2016 and “Tides”, released in 2017. Their sound certainly has the inspiration of early 80’s new wave about it, but with a more mellowed, laid back vibe which I found quite relaxing really. It’s tinged with some influences from Bjork amongst others. I believe a new album is due soon, watch this space. I recently chatted to the guys:

What inspired you to become musicians?

I think that we both just started out realizing we are musical by nature. It’s strange to say, but we weren’t so much inspired as much as asking “how do we get to play music and/or sing?” We just both separately in our youth, starting to find that we had creative needs that needed to be meet musically. Eric’s brother was a drummer, and it allowed for an extra pair of drumsticks around the house to be used. Shannon’s mother played music, but Shannon enjoyed singing from since she could remember.

Who influences your music and its sound?

So much to answer with this. For Static Shore, we take from peaceful to elaborate combinations of synthetic and ambient vibes. We both loved the band Garbage and their chord structures. Throw in 90’s melodic indie rock bands, and fast forward to Purity Ring, Churches, and anything else that involves synths and beats. Our music is of a mellow fashion, creating spaces while having deepness in the lyrics. Having room for the vocals and melody is important too.

What are your future plans and goals?

We are songwriters and performers, but we just flat out love to right and create. There is so much new material that we have and that percolates constantly that it’s difficult to shut that down and focus on performing. We know that fans love our performances but we also can’t stop writing. So, writing, recording, releasing music, that’s that goal for the most part. You’ll get shows from us too, and we have some ambitions developing. Performing on coast lines, art walks, are attractive to us.

Oh, and we love to make music videos for our songs. There’s an extra level of art involved in watching your music dance with video images.

What motto or advice do you live by?

“Keep it sexy”. This could sound sexiest, but we don’t mean this that way. Instead, it means keep it short and to the point. Fluff gets in the way of what’s most meaningful in a song. It’s that raw, underlying current of songwriting and performing that is most important. If done well, it’ll have its followers. However, to us, if a song or project doesn’t get past our level of interest, we’re not moving forward with it. So it has to be attractive enough for us to complete it, or we just throw it in the pile of “we might get to it later”. Hence, “keep it sexy” or maybe getting to say “keep it honest and interesting and to the point.”

Also, the music we’ve been most proud of is when we write it for only us and could not care if anyone else does. If others like it, there’s sort of a moment of “ok then, this must be rather good to hear, if others like it.

What is your favorite car/karaoke song?

We once did karaoke in Vancouver. Tub-thumping seemed to work well.

We have some festivals cooked up this summer, and yet more music is in the studio getting finalized.

What was the last album you bought?

It was either one from “Washed Out or Future Islands”. Yeah, we still buy albums, more so the downloadable versions, but yeah.

Any message for new listeners?

We write for the longevity of music. If you enjoy us upon first listen, fantastic. But we’re hoping there’s a long-term relationship you’ll develop with our music. Oh and we LOVE remixes (to any DJ listeners out there).

When not playing music, what do you get up to?

Shannon loves to read books, gardening and to promote nature. Eric is involved in the electric vehicle movement, and we love to binge on mostly quirky comedy shows. We both hiking, travelling and even prefer to be the introverts that we are.

All links to Static Shore’s media