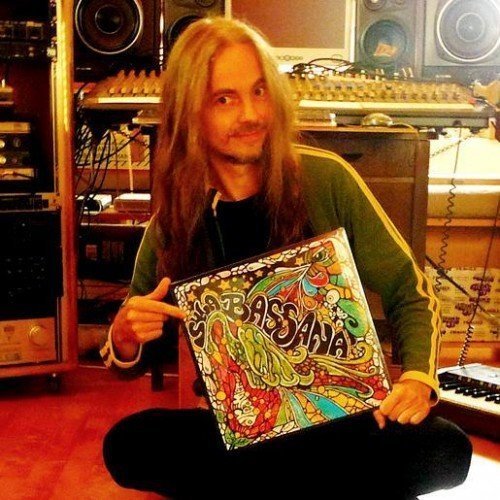 From the album “Organ Accumulator”:

Sula Bassana is the…

In 1994 he co-founded the psychedelic rock band Liquid Visions. They released five albums and a couple of singles on several labels. In 1997 he founded Zone Six to create spontaneous psychedelic space rock trips. Zone Six are still existing and released seven official albums so far. In 1998 Andi (Growing Seeds) and Sula Bassana formed the studio project Weltraumstaunen to record some excellent freak outs. Two albums were released on Nasoni Records. Finally, in 1998 he moved to Bayreuth (Bavaria) to fill the drummer’s seat in the space rock band Growing Seeds. But in early 1999 they gave up and he went back to Berlin. They just released one vinyl-single on Pleitegeier Records in 1999. In early 2003 he left Liquid Visions.

…Dreamer was released on Nasoni-Records in 2002. More albums followed. Sula Bassana played in several projects. One of them was Psychedelic Monsterjam, together with Ax Genrich on guitar and Mani Neumeier on drums. Two live-CDs were released on Sunhair Records. In 2003 he co-founded the psychedelic post rock project Südstern 44, together with Ellipopelli (ex Growing Seeds) and Julius K (ex Zone Six). One album (CD and LP) on Nasoni-Records and one CD-R has been released by the band.

In late summer 2006 Sula Bassana moved to Austria and founded his label Sulatron Records. He played guitar in the young local rock band Alice Dog. In addition, he had started a project called Interkosmos. In this project he played with Sergio Ceballos (guitar and vocals) and Bernhard Fasching, a.k.a. Pablo Carneval, (drums). Another short time project was born with the saxophone-wizard Mario Rechtern and spontaneous guests: Das Alte Haus. They just released a CD-R on a New York based jazz label (Tiger Asylum Records).

All links to the relevant media