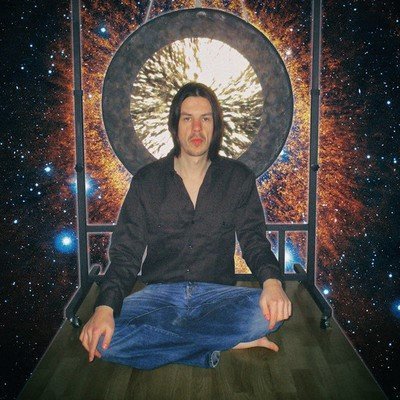 From the album “Ego Therapy”:

Surya Kris Peters is a solo project of Samsara Blues Experiment guitarist and vocalist, Christian Peters, initiated in 2015. Below you can read a collection of what the media wrote about Surya Kris Peters.

Musically there is a lot going on here, and it would be impossible to fit it into any particular genre. Peters’ influences range from ‘classical’, he cites Czech composer Smetana in particular; but also early electronic music such as the Radiophonic Workshop, and there are elements of 70’s Michael Oldfield and Jean Michel Jarre in his work. These are to a certain extent destabilized by elements of ‘Krautrock’, which allow for the sorts of departures that keep you guessing and don’t allow the you to fall into the trap of getting so carried away by the music that it loses you, or you it. Similarly, there are Middle Eastern and Eastern influences that further broaden Peters’ musical palate adding further color and texture to the music… (Psych Insight)

Set the controls of the Wayback Machine to Berlin circa 1972. Imagine a mash up of Popol Vuh “Affenstunde”, Klaus Schulze’s “Cyborg”, and Ash Ra Tempel’s “Join Inn”. Retro-underground-krautrock at its finest. (Ken Golden on “Holy Holy Holy”)

Surya Kris Peters… is an exploratory mission, a climactic transmutation of mastery, and a triumph of knowing the nature of the universe. (More Fuzz)

This album is bright/dark beautiful without intention just sheer great instrumental electronic music composition with perfect pitch arrangements and the perfect dose of experimentation. (Prog Archives on “The Hermit”)

An homage to Peters´ musical influences; from the early memories of Mike Oldfield and Bedrich Smetana to krautrock luminaries Popol Vuh and Klaus Schulze via synthesizer drone-minimalist Eliane Radigue and sounds from Far East by artists like Osamu Kitajima and Ananda Shankar. The product of this mixing and melding is a truly superb album; radiant, beautiful and highly informed. (Dayz Of Purple and Orange)

It is a record that harks back to an era of groundbreaking sonic experimentation but with a feel that is distinctly contemporary. ‘The Hermit’ is a record of rare beauty which caught our ear immediately and a wonderful introduction to the music of Surya Kris Peters. (Thee Psychedelicatessen)

The first thing to remark on about the music is its sheer beauty. This is an album that you put on and immediately feel at one with. It is an album that seems to understand you, and the sheer act of listening somehow makes you feel lighter. Add into that an element of ‘active’ listening and the whole this just takes off, with repeated listens only adding to that feeling. This is an album that sets up ideas and the comes back to them so that they add a sense of comfort as you move along, but also heightens the senses by bring the seemingly mundane into sharper and more meaningful focus. Yes it’s an album that you can listen to late at night, but it is also something you can hear at any time of the day and let it you just stop you in your tracks and see the world in a new way (Psych Insight)

For fans of electronic and psychedelia “The Hermit” by Surya Kris Peters might be a real gem, which they shouldn’t miss. These three-quarters of an hour of music offer a wide-range of ideas, atmospheres and soundscapes… (Rocktimes)

I really enjoy the tranquil, evocative and transdimentional mood on this release. You just need to lay down, close your eyes, and let the music carry you to other, new and wonderful places in the multiverse. This is a great way to relax and regain your strength in this way too stressful, busy and chaotic world of ours. (Astral Zone on “Status Flux”)