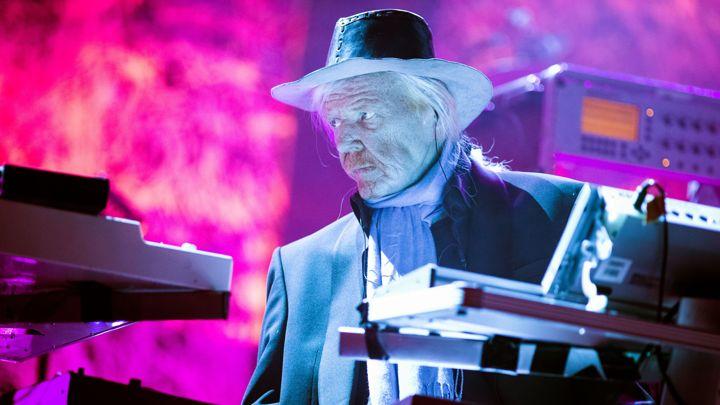 Edgar Froese, founding member and keyboardist of the long-running band Tangerine Dream and an electronic music pioneer, passed away after suffering a pulmonary embolism on January 20th 2015. Froese was 70.

“This is a message to you we are very sorry for… On January 20th 2015, Tuesday afternoon, Edgar Froese suddenly and unexpectedly passed away from the effects of a pulmonary embolism in Vienna,” the band posted on Facebook Friday afternoon. “The sadness in our hearts is immensely. Edgar once said: ‘There is no death; there is just a change of our cosmic address.’ Edgar, this is a little comfort to us.”

Formed in 1967 in West Berlin and born out of the same Krautrock scene that produced Kraftwerk, Cluster, Neu! and Can, Tangerine Dream’s 1970 debut LP Electronic Meditation, which featured fellow electronic music giant Klaus Schulze, shared many of the same musical qualities as their German peers.

However, by the early Seventies, Froese and his reformed Tangerine Dream soon journeyed toward more celestial, synthetic soundscapes as featured on albums like 1971’s Alpha Centauri and 1973’s Atem. After being among the first artists to sign with Virgin Records, Tangerine Dream released their seminal 1974 album Phaedra, where Froese experimented with sequencers and launched the Berlin School style of electronic music. The album is widely considered the band’s masterpiece.

Despite a revolving door lineup that was constantly in flux, Froese remained the group’s backbone and the lone member to perform with Tangerine Dream since their incarnation. Over the course of Tangerine Dream’s nearly half-century lifetime, the band cultivated a cult fan base thanks to a steady stream of studio albums and live recordings – which, all totaled, was more than 100 releases – as well as Froese’s own solo output. In later years, when the band added Froese’s son Jerome to their roster, Tangerine Dream’s style shifted yet again, aligning itself with a more ambient, new age sound, but the band’s lasting impact on electronic music never diminished.

“So sad to hear of the sudden death of my friend Edgar Froese, founder of Tangerine Dream. Great memories,” Brian May tweeted. The Queen guitarist performed with Tangerine Dream at a concert in 2011; that show was subsequently released as Starmus – Sonic Universe. Scissor Sisters’ Jake Shears wrote, “RIP Edgar Froese of Tangerine Dream. Brought me endless inspiration and enjoyment. I dedicate my first film score to his memory.”

“We started with Tangerine Dream. We’ve used them before in terms of licensed music – we’re huge fans of Edgar Froese,” Grand Theft Auto V soundtrack supervisor Ivan Pavlovich told Rolling Stone. “When we started to think about who would be the right composer for this game, he was the first name that came to mind.”

Just prior to his death, Froese completed work on his 500-page autobiography Tangerine Dream – Force Majeure – 1967 – 2014. That book is available to pre-order now through Tangerine Dream’s official site.

‹ A Touch Of Oblivion