The theremin, originally known as the ætherphone/etherphone, thereminophone or termenvox/thereminvox, is an early electronic musical instrument controlled without physical contact by the thereminist (performer). It is named after the westernized name of its Russian inventor, Léon Theremin, who patented the device in 1928. 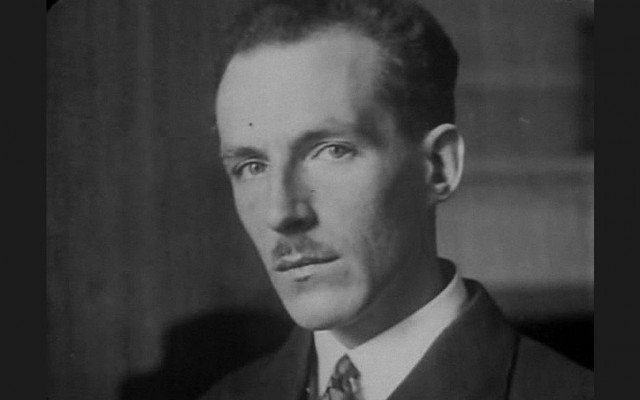 The instrument’s controlling section usually consists of two metal antennas which sense the relative position of the thereminist’s hands and control oscillators for frequency with one hand, and amplitude (volume) with the other. The electric signals from the instrument are amplified and sent to a loudspeaker.

The theremin was used in movie soundtracks such as Miklós Rózsa’s for Spellbound and The Lost Weekend and Bernard Herrmann’s for The Day the Earth Stood Still and as the theme tune for the ITV drama Midsomer Murders. This has led to its association with a very eerie sound. Theremins are also used in concert music (especially avant-garde and 20th- and 21st-century new music) and in popular music genres such as rock. Psychedelic rock bands in particular, such as Hawkwind, have often used this instrument in their work. 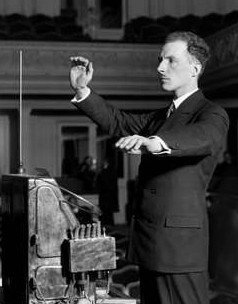 History of the theremin

The theremin was originally the…

…product of Russian government-sponsored research into proximity sensors. The instrument was invented by a young Russian physicist named Lev Sergeevich Termen (known in the West as Léon Theremin) in October 1920 after the outbreak of the Russian civil war. After a lengthy tour of Europe, during which time he demonstrated his invention to packed houses, Theremin found his way to the United States, where he patented his invention in 1928 (US1661058). Subsequently, Theremin granted commercial production rights to RCA.

Although the RCA Thereminvox (released immediately following the Stock Market Crash of 1929), was not a commercial success, it fascinated audiences in America and abroad. Clara Rockmore, a well-known thereminist, toured to wide acclaim, performing a classical repertoire in concert halls around the United States, often sharing the bill with Paul Robeson.

…United States, though the circumstances related to his departure are in dispute. Many accounts claim he was taken from his New York City apartment by KGB agents, taken back to the Soviet Union and made to work in a sharashka laboratory prison camp at Magadan, Siberia. He reappeared 30 years later. In his 2000 biography of the inventor, Theremin: Ether Music and Espionage, Albert Glinsky suggested the Russian had fled to escape crushing personal debts, and was then caught up in Stalin’s political purges. In any case, Theremin did not return to the United States until 1991.

After a flurry of interest in America following the end of the Second World War, the instrument soon fell into disuse with serious musicians, mainly because newer electronic instruments were introduced that were easier to play. However, a niche interest in the instrument persisted, mostly among electronics enthusiasts and kit-building hobbyists. One of these electronics enthusiasts, Robert Moog, began building theremins in the 1950s, while he was a high-school student. Moog subsequently published a number of articles about building theremins, and sold theremin kits which were intended to be assembled by the customer. Moog credited what he learned from the experience as leading directly to his groundbreaking synthesizer, the Moog.

Since the release of the…

…film Theremin: An Electronic Odyssey in 1994, the instrument has enjoyed a resurgence in interest and has become more widely used by contemporary musicians. Even though many theremin sounds can be approximated on many modern synthesizers, some musicians continue to appreciate the expressiveness, novelty and uniqueness of using an actual instrument. The film itself has garnered excellent reviews.

Today Moog Music, Dan Burns of soundslikeburns.com, Chuck Collins of theremaniacs.com, Wavefront Technologies, Kees Enkelaar and Harrison Instruments manufacture performance-quality theremins. Theremin kit building remains popular with electronics buffs; kits are available from Moog Music, Theremaniacs, Harrison Instruments, PAiA Electronics, and Jaycar. On the other end of the scale, many low-end Theremins, some of which have only pitch control, are offered online and offline, sometimes advertised as toys. 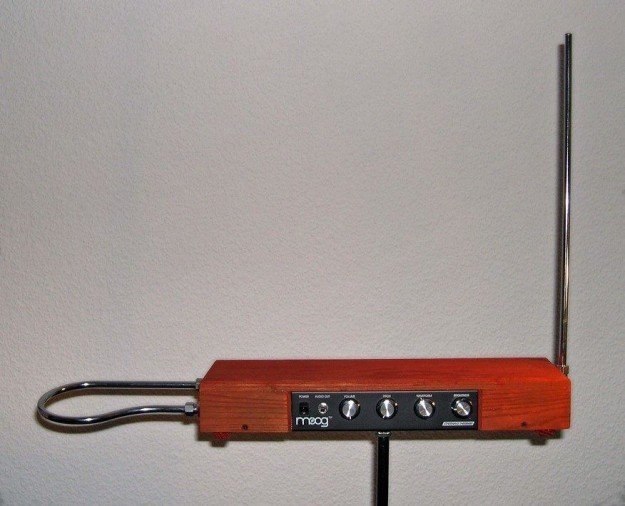 The instrument is distinguished…

…among musical instruments in that it is played without physical contact. The musician stands in front of the instrument and moves his or her hands in the proximity of two metal antennas. The distance from one antenna determines frequency (pitch), and the distance from the other controls amplitude (volume). Most frequently, the right hand controls the pitch and the left controls the volume, although some performers reverse this arrangement. Some low-cost theremins use a conventional, knob operated volume control and have only the pitch antenna. While commonly called antennas, they are not used for receiving or broadcasting radio frequency, but act as plates in a capacitor.

The theremin uses the heterodyne principle to generate audio signals. The instrument’s pitch circuitry includes two radio frequency oscillators. One oscillator operates at a fixed frequency. The other oscillator’s frequency is controlled by the performer’s distance from the pitch control antenna. The performer’s hand acts as the grounded plate (the performer’s body being the connection to ground) of a variable capacitor in an L-C (inductance-capacitance) circuit, which is part of the oscillator and determines its frequency. (Although the capacitance between the performer and the instrument is on the order of picofarads or even hundreds of femtofarads, the circuit design gives a useful frequency shift.) The difference between the frequencies of the two oscillators at each moment allows the creation of a difference tone in the audio frequency range, resulting in audio signals that are amplified and sent to a loudspeaker.

To control volume, the…

…performer’s other hand acts as the grounded plate of another variable capacitor. In this case, the capacitor detunes another oscillator; that detuning is processed to change the attenuation in the amplifier circuit. The distance between the performer’s hand and the volume control antenna determines the capacitance, which regulates the instrument’s volume. 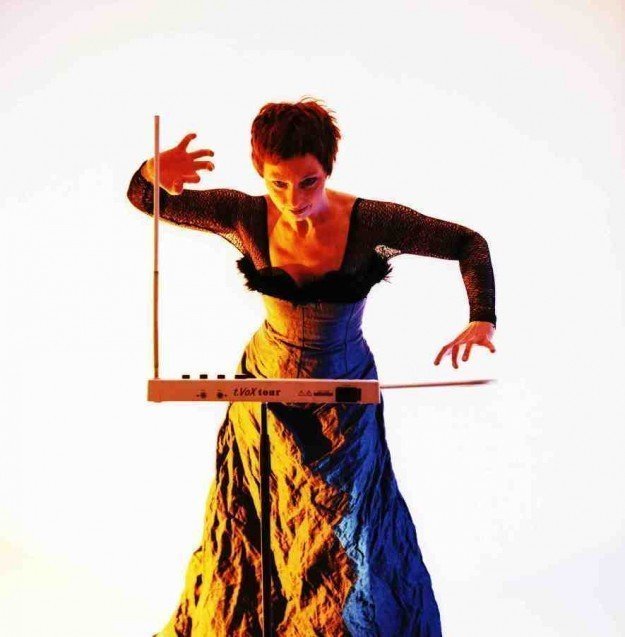 Important in theremin articulation is the use of the volume control antenna. Unlike touched instruments, where simply halting play or damping a resonator silences the instrument, the thereminist must “play the rests, as well as the notes”, as Clara Rockmore observed. Although volume technique is less developed than pitch technique, some thereminists have worked to extend it, especially Pamelia Kurstin with her “walking bass” technique and Rupert Chappelle.

Recent versions of the theremin have been functionally updated: the Moog Ethervox, while functionally still a theremin, can also be used as a MIDI controller, and as such allows the artist to control any MIDI-compatible synthesizer with it, using the instrument’s continuous pitch to drive modern synths. The Harrison Instruments Model 302 Theremin uses symmetrical horizontal plates instead of a vertical rod and horizontal loop to control pitch and volume, with the volume increasing as the hand approaches the plate.

The theremin used in concert music

Maverick composer Percy Grainger chose to use ensembles of four or six theremins (in preference to a string quartet) for his two earliest experimental Free Music compositions (1935–37) because of the instrument’s complete ‘gliding’ freedom of pitch.

Musician Jean Michel Jarre used the instrument in his concerts Oxygen In Moscow and Space of Freedom in Gdańsk, providing also a short history of Léon Theremin’s life.

The five-piece Spaghetti Western Orchestra use a Theremin as a replacement for Edda Dell’Orso’s vocals in their interpretation of Ennio Morricone’s “Once Upon a Time in the West”.

The theremin in popular music

Theremins and theremin-like sounds started to be incorporated into popular music from the end of the 1940s (with a series of Samuel Hoffman/Harry Revel collaborations) and this continued, with varying popularity, to the present.

While The Beach Boys’ “Good Vibrations” features an instrument that sounds much like a Theremin, in fact the sound is made by an instrument called the Tannerin. Jimmy Page of Led Zeppelin used a variation of the instrument (minus the loop) during performances of “Whole Lotta Love” and “No Quarter” throughout the performance history of Led Zeppelin, an extended multi-instrumental solo featuring theremin and bowed guitar in 1977, as well as the soundtrack for Death Wish II released in 1982. Brian Jones of The Rolling Stones also used the instrument on the group’s 1967 albums “Between the Buttons” and “Their Satanic Majesties Request”. 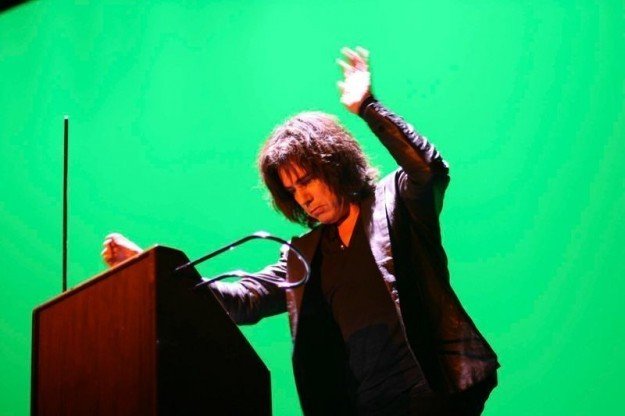 Lothar and the Hand People, formed in Denver in 1965, used a Theremin (named “Lothar”) onstage and on their LP. The Lothars are a Boston-area band formed in early 1997 whose CDs have featured as many as four theremins played at once – a first for pop music. Although credited with a “Thereman” on the “Mysterons” track from the album Dummy, Portishead actually used a monophonic synthesizer to achieve theremin-like effects, as confirmed by Adrian Utley, who is credited as playing the instrument; he has also created similar sounds on the songs “Half Day Closing”, “Humming”, “The Rip” and “Machine Gun”.

Russian composer Dmitri Shostakovich was one of the first to incorporate parts for the instrument in orchestral pieces, including a use in his score for the film Odna (Russian: Одна – 1931, Leonid Trauberg and Grigori Kozintsev). While the theremin was not widely used in classical music performances, the instrument found great success in many motion pictures, notably, Spellbound, The Red House, The Lost Weekend (all three of which were written by Miklós Rózsa, the composer who pioneered the use of the instrument in Hollywood scores), The Spiral Staircase, Rocketship X-M, The Day the Earth Stood Still, The Thing (From Another World), and The Ten Commandments (the 1956 DeMille film).

The theremin is played and identified as such in use in the Jerry Lewis movie The Delicate Delinquent.
The instrument is prominent in the score for the 1956 short film “A Short Vision” which was aired on “The Ed Sullivan Show” the same year used by the Hungarian composer Matyas Seibel.

More recent appearances in film scores include Monster House, Ed Wood and The Machinist (both featuring Lydia Kavina). The DVDs for Ed Wood, Bartleby and The Day the Earth Stood Still and Spellbound (Criterion Collection) include short features on the theremin. Robby Virus, the founder and theremin player of the band Project:Pimento, was featured on the soundtrack to the movie Hellboy (2004).

A theremin was not used for the soundtrack of Forbidden Planet, for which Louis and Bebe Barron built “disposable” oscillator circuits and a ring modulator to create the “electronic tonalities” for the film.

Los Angeles-based thereminist Charles Richard Lester is featured on the soundtrack of Monster House and has performed the US premiere of Gavriil Popov’s 1932 score for Komsomol – Patron of Electrification with the L. A. Philharmonic and Esa-Pekka Salonen in 2007. 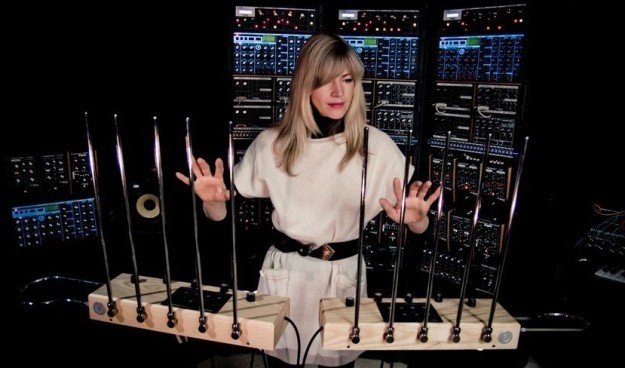 Dorit Chrysler at a polyphonic theremin