Vangelis at the age of 75 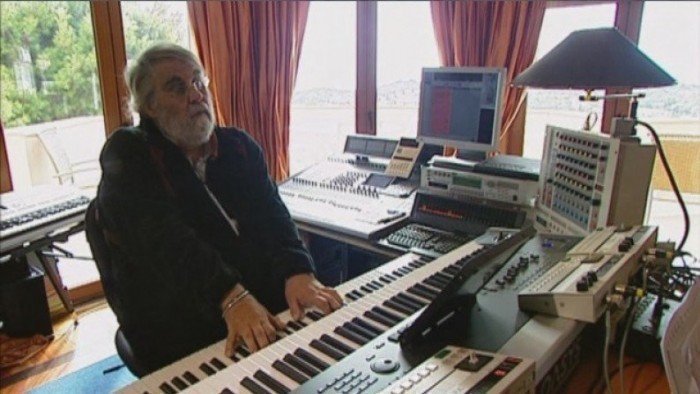 One could try something…

…unusual for the recent 75th birthday of one of the most prolific synthesizer artists, instead of reviews of selections from his musical output spanning many decades. Some factual information alone could depict the significance of the almost impossible phenomenon in electronic music. This phenomenon is the Greek Ευάγγελος Οδυσσέας Παπαθανασίου (Evángelos Odysséas Papathanassíou). We all know him much better as Vangelis.

Regardless of one’s taste or preference for certain sub-genres of contemporary electronica, there are a few unique facts. These facts relate to his body of work, its impact and significance in synthesizer music.

Having shot to fame…

…as the keyboardist and one of the musical brains of Aphrodite’s Child, his musical output soon ventured far outside the confines of progressive rock. It also ventures far outside what nowadays one understands stereotypical “electronic music” to be.

Even in 2018, it is a curious fact that one is unable to name another synth artist whose musical output spans so many categories, styles, genres and sub-genres. Vangelis uses electronic instruments as creative tools to connect and blend these vastly varied genres.

There is early music…

…specifically Medieval and Renaissance secular and sacred music. There are Far-Eastern, African and Celtic, Greek and Arabic influences and deep ethnic flavours.

There are choral-symphonic oratorios with resonances of Penderecki or Orff. Also, at the same time there are Medieval characteristics that are returning to the days of early polyphony. There is jazz-rock and even good old-fashioned rock & roll.

There are minimalist works with the shamanic and hypnotic traits of Reich and Glass. There are eminently experimental electronic adventures with echoes of IRCAM sonic collages and tone paintings.

And there are Greek ballads and folks songs from the Middle Ages transposed into spacey electronic works. There are futuristic soundtracks with era-defining impact from cult film classics. There are space opera-style grandiose suites composed for NASA and ESA space missions. Furthermore, there are impressionistic works based on the works of El Greco.

There are piano poems of twenty-plus minutes comfortably sitting within symphonic and electronic structures. There are ancient Middle-Eastern arrangements coupled with electronics that evoke worlds that are distant in time and space.

One can travel from the…

…dark processions of the Inquisition to the peak of Mount Everest. And one can travel from delicate Chinese ornaments to vast Gothic vaults. One can travel from African tribes’ ceremonial polyrhythms to the hustle and bustle of a modern metropolis’s nerve centre. Also, one can travel from intimate folk ballads to the unleashing of colossal powers by ancient and future deities and demigods.

Above list is not exhaustive. You can find all this in the discography of one man who looked at synthesizers as creative tools serving any musical imaginings instead of specific instruments for a specific genre limited to specific sound worlds.

Looking back at many decades of musical output, perhaps the central characteristic that made all this seemingly impossible musical range a reality, was and is the refusal to treat technology as a dominant factor in the creative process.

First and foremost, there is, as some said, a great Romantic in front of those keyboards. Also, there is an eminently human passion that puts technology in the service of the imagined sound worlds that refuse to listen to artificially imposed boundaries of styles and genres. Vangelis doesn’t take a rather academic and cerebral approach to electronic creations and the studio workflow. Instead, Vangelis prefers to rely on improvisations and instinctive processes, as some of the rare studio footage from several decades shows.

It is an interesting…

…quasi-paradox in the case of Vangelis: treating complex, and often trailblazing, technology as just any other conventional instrument. An instrument that allowed him to produce the most unconventional results that move freely across the musical traditions of many centuries and many thousands of miles.

Vangelis in electronic music demonstrated what the late Ray Bradbury demonstrated in literature. He used the characteristic tools of the most futuristic outer realms of a chosen art form. One can create eminently evocative, passionate and hence emotional works that are not hampered, but instead are augmented, by the possibilities of the chosen creative tools. As he put it in an interview about electronic music:

The source is electronic, but what you do with it is the same as with acoustic instruments. Sound is sound and vibration is vibration, whether from an electronic source or an acoustic instrument. The way we use these sources is the key in order to define the musical result we require. Without neglecting the acoustic conventional instrumental works that are not hampered, but instead are augmented, I spend a fair amount of time dealing with the electronic sources of sound.

Someone asked a few weeks ago on a synth music forum: “What genre does Vangelis’ music belong to?” As all music journalists and reviewers struggled over the decades, so did the numerous forum members. Except for one who answered: as: “The genre is called Vangelis“.

Enjoy this documentary about Vangelis and his music

Written by Levente Tóth, originally posted on Notes From A Nebula