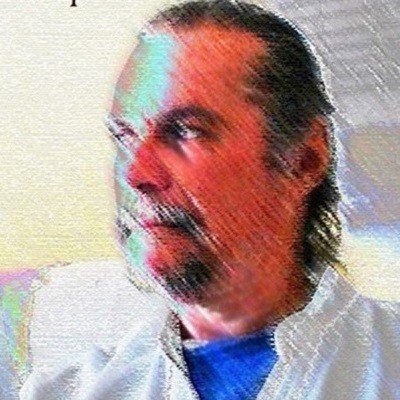 From the album “Partum Spiralis”:

Vasco Martins is a Cape Verdean composer of orchestral music, electronic, progressive, ambient, and beautiful incursions in traditional CV music. Born in 1956 in Queluz, Portugal, he lives now in Calhau, Cape Verde. As a performer Vasco Martins plays electronic keyboards with his own design, piano and guitar.

In the early 1980s, when he was studying in Paris, fascinated by the possibilities of synthesizers, he began his forays into electronic music, which until now has remained the axial force of his music. As a naturalist, he has a special approach to the Atlantic Ocean and sea eagle Pandion halieatus. His epic symphony No. 9 Atlantic Ocean, shows this close interconnection. In a career spanning over 40 years, writing and composing more than 30 albums, Vasco Martins is regarded as a representative composer of electronic and orchestral music.

In 1979 he recorded his first LP. He returned to Cape Verde. It is there that he has created most of his work as a composer and instrumentalist. Also, Vasco Martins worked as a musicologist and a producer. He organized and founded the Baía das Gatas Music Festival along with his friends in 1984, the first music festival in the nation.

Vasco released more albums including Quinto Mundo in 1989, Eternal Cycle in 1995, Memórias Atlânticas (Memories from the Atlantic) in 1998 and Lunário Perpétio in 2001. He released 4 Sinfonias in August 2007. His album Lua Àgua Clara (Clear Moon Water), a CD, was recorded in Paris in 2008. Later Vasco created Li Sin, released in June 2010. One of his singles were first heard on Praia FM. Nearly two years later in January 2012, he released Azuris, the Latin name for Blue. In the spring of 20147 he released his album Twelve Moons.

Vasco Martins is the first Cape Verdean to ever perform symphonies. The first one was related to the Spring Equinox. Then, the second symphony started in 1998 and completed in 2002 and was titled Erupção (Eruption), it was revised in 2004. The third symphony was titled Arquipélaco Magnético, the Magnetic Archipelago. The fourth one was titled Buda Dharma (Buddha Dharma) made in 2001. The fifth one was set in the Eastern parts and divided into six parts, the first four were the directions, the other two were in space titled Nadir and Zenith. The sixth symphony was set in his family island’s tallest summit Monte Verde, which was also Pandion Halieatus. The seventh one was Alba, the eighth symphony was titled A Procura da Luz (The Search for Light) and the ninth one was for Orchestra. This symphony was performed with the Moravian Philharmonic Orchestra.

Vasco Martins also made works related to instrumentals, including 4 Notes on the City of Mindelo, using a solo clarinet. He also performed chamber music, piano works including Piano Azul (Blue Piano) in 1998 and guitar works including the Subtle Desert and electro music.

In 2008 he performed the opera play titled Crioulo (Creole). The premiere was at Centro Cultural de Belém (CCB) in Lisbon on March 27, 2009. He was the componist and performed the cantata “Lágrimas na Paraise”.

All links to Vasco Martins’ media